hey ya'll. It's been a pretty good week. No sleep, but what's new, eh? Last night we watched Time Bandits and Surf Ninjas. They are both pretty amusing movies in very different ways. I'm not sure that either of them were meant to be amusing, but what can ya' do.

Time Bandits is a Terry Gilliam film that is very Monty Python-esque (which makes sense, since he was a big part of the Monty Python world.) The movie revolves around several midgets (yes, midgets) who are running from God, by travelling through time. Throughout their journey, they meet Robin Hood (this just might be one of the funniest movie scenes in history) and Napoleon.

Surf Ninjas, on the other hand, is one of those corny early 90's movies, which I'm sure is why I like it so much. The menu has an incredibly cheesy game on it, called "Pick That Flick," and let's just say that during the past few days, Ben and I have played it for at least a few hours. I must have WAY too much time on my hands.

It's crazy how lack of internet can affect the rest of one's life. At this point in time, I can only access the internet from the university. With all that's going on, it's like the internet has fallen off the face of the planet for me (or me for it).

In today's news, I got a tattoo..it's on my left shoulder blade. I absolutely love it. There's something to be said about designing your own artwork and then putting it somewhere permanent. I must warn you non-inked citizens, though. Tattooing is extremely addictive. This is my first one and I am already yearning to have another one done. All in good time, all in good time. If you ever decide to have it done, go to Garrett. He's the best. 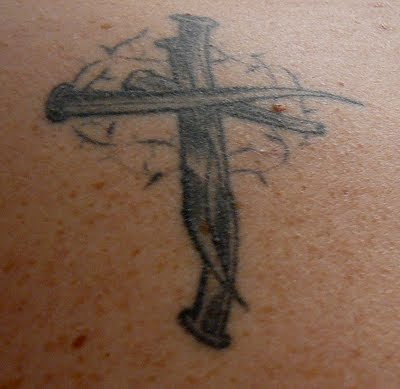