Well, I got some..interesting news today. My other best friend seems to be moving..so this is both of them now. I'm really going to miss him a lot..

It doesn't help that the church situation is not going well. I don't want to badmouth the church, so I'm not going to post the specifics, but please keep them in prayer. Satan is attacking and the church isn't ready to fight back. Other than that, I'm not really sure what to do about it.

On a good note, though, we won the football game against SMU so we are 3-0 so far..which is the best our team has done in probably nearly 50 years. It was one of those end-of-a-football movie games, where you knew the "good guys" were going to win, but it came down to the last play during the last minute. It was amazing, though I'm sure I'll need several painkillers to make the college-kids-screaming headache go away. (Just kidding.)

We, unfortunately, got our pictures taken (by someone with no camera skills) with the big Ronald. He was completely hitting on us and wouldn't leave us alone until we got our pictures taken with him. I'm going home and watching COPS; I'm sure he'll be the next guy they nab. I can just see it now: "Drunk Ronald McDonald sentenced to five years in prison with 2 counts of kidnapping, 1 count of DUI, and 3 counts of fashion crime." Geez.

On a lighter note, we found a random couch on the grass by the parking lot. It looked quite comfy. I was extremely tempted to take a nap on it, since nobody was claiming it at the time, but Amanda didn't want us to get caught. Alas, the couch was gone when we left the game. I may never know that kindred spirit who thought to bring a couch to the football game.

It seems that just as you think things might finally be turning out for the good..it all starts to go downhill again.

If you pray, please pray for guidance and patience..because I really need them right now.

Email ThisBlogThis!Share to TwitterShare to FacebookShare to Pinterest
Labels: pray

This has been a long week..I had the unfortunate circumstance of being sick while having a sprained ankle. Everyone's out of town this weekend, and I couldn't get upstairs on my own. The doctor said not to even try to walk on it for a few more days. So yes, I actually tried out ordering a pizza online. I was able to order it, pay for it, and give the delivery guy specific instructions to come around through the back yard and knock on the sliding door (thus allowing me to NOT have to venture upstairs for another day). He even brought me a paper plate, napkins, and a bottle o' Dr. Pepper. How amazing is that internet, anyway.

On Monday night, upon the reappearance of all my friends, a bunch of us went over to David's house and watched Breakin2: Electric Boogaloo..which is the mother of all 80's break dancing movies. There is really no plot, but the level of dancing in this film surpasses any other 80's dancing movie, especially Footloose.

you spin me right round, baby

I sprained my ankle today. It kinda' hurts..a lot. And then I got home and I saw this music video and it scared the crap out of me. It's the video for Dead or Alive's "You Spin Me Round (Like A Record)." Now, most of you know how much I (sadly enough) love 80's music..but watching the video and seeing the lead singer dressed like a cross between Boy George and a pirate..I just don't know that I can justify it anymore...plus that dude on the right seems to be sporting a mullet.

I apologize, but if I had to endure it, so do you. 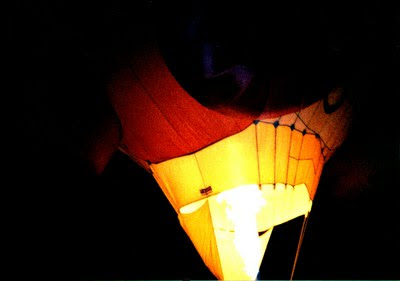 Today we got up at 4:30 am and drove to Rancho to watch the annual balloon races..people come from all over the world to see it. The best part is Dawn Patrol..before the sun rises (it's pitch black) five or six balloons rise above the park and it's awesome to see them glowing in the dark..so worth getting up early to see. This picture can't even begin to justify the real thing. It's one of the most breathtaking man-made creations in existence. (Well, at least in MY existence.)