We're always messing around and creating/tweaking new recipes, and this one was too delicious not to share! I'm not really sure what to call them, so if you've got a good name, let me know!

For now, let's call them muffin-pan-chicken-cups (quite a mouthful, both the name and the actual food!)

**This time, I chopped two bell peppers and 1/4 of a Japanese kabocha (pumpkin-like squash) into thumb-nail sized pieces. You could really use any veggies you like, though! 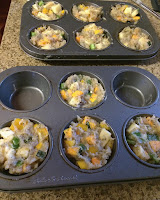 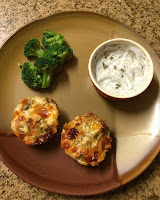 I don't have much to say (or the energy to say it), as I've been through the ringer this week! A nasty virus is going around the island, and it's caused me to be without a voice for more than a week. Then came the fever, the chills, the muscle aches, the coughing, sneezing, and aching head!

I finally went to the hospital yesterday and they said I have a sinus infection and an ear infection. Because they could only prescribe medications that I'm allergic to, I've been using every home remedy I can get my hands on to get rid of this nastiness!

Some actually did some good (sea salt gargle, rice bag on the ear, essential oils around the outside of the ear, apple cider vinegar steam inhalation) and others didn't (you probably don't even want to know what some of them were!)

Then I remembered that when we lived in Reno and felt an illness coming on, we'd always run to Pneumatic to pick up a Wonder Beverage. I haven't had one in years, so I'm sure it's not exact, but this is the closest I've come to recreating it here at home. Since Pneumatic has closed its doors, we may never get to have a "real" one again! Regardless, both the original and this variation will provide a kick to the sinuses as well as a honey-laden soothing to the throat.

**Note: You may want to use different amounts of the ingredients to taste!

Directions:
Posted by Kari at 4:06 AM No comments:


**See the corn allergen list for more ingredients/derivatives to avoid.**

For local anesthetics, use only carbocaine or preservative-free lidocaine. No inactive ingredients other than water and/or sodium chloride!

Check the inactive ingredients and anticoagulants, as many are corn-derived. Please discuss information with patient or emergency contact before using blood products. If a transfusion is absolutely necessary, please take necessary precautions to prepare for possible allergic reactions.