shoutout to a great company

Last week, Ben found a bag of organic chocolate covered apricots at the BX and was excited because it said gluten free in big letters on the front. He enthusiastically brought it to me because it's such a rarity to find something packaged here that won't make me sick! When I looked at the fine (and when I say fine I mean fine because it was tiny) print, I noticed that it said the product was packaged in a plant that also processes wheat and it may contain traces.

What about regulations? Silly me, but if a product says gluten free, I expect it to be gluten free. A product that might contain traces of wheat is NOT gluten free.

Unfortunately, this is a normal thing we celiacs have to deal with...checking and rechecking and triple checking packaging and websites, because you just never know. It stinks. But, I'm used to it so I put the bag back on the shelf and moved on without thinking about it again.

Ben, not so much. (This is the part of the story that warms my heart!) A few hours after we got home, he was furiously typing away on his computer. I asked him what he was so impassioned about and he said he was writing a letter. He was so upset to have gotten my hopes up, only to have them dashed, that he wrote a letter to the company. I will include the letter at the bottom of the post, but for anyone who doesn't want to read it, it basically shared our disappointment that the bag was clearly labeled gluten free but wasn't, in actuality.

Some of you may not understand the big deal. For those fad diet people, the words gluten free on a product mean that the product matches their want to eat foods not made up of wheat or other gluten-containing ingredients. For those of us who actually have Celiac Disease, though, this isn't good enough. That tiny speck of something is enough to make a Celiac seriously sick. In fact, it only takes 1/64 of a teaspoon (that's .08 of a ml) to cause intestinal damage. 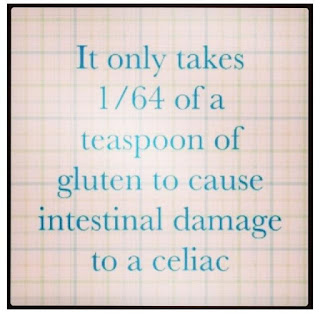 He sent the letter to the contact email address on their website, hoping to spread some awareness but not really expecting to get a response.

Within an hour, we had a reply from the president of the company. He thanked us, admitted there was an problem, and explained that it had been a packaging issue. There was an error on the bag, and their product was only processed in a dedicated gluten free facility. They had already addressed the issue and the new packaging reflects that. The product we had seen used the old packaging.

We responded back again, thanking him for his response and explanation.

What a refreshing incident to have happened! That is good business practice - to have admitted something wasn't right and to have been so on the ball to have already fixed it. Not only did we go back to the BX and purchase the product (the apricots were delicious), but I want to make sure to spread the word of a great company!

I was very excited to see your product proudly displayed on an end-cap at our Base Exchange here in Misawa, Japan.  Not only did it look delicious, but in clear labeling on the front it said "GLUTEN FREE".  I checked the back and was even more excited that the ingredients were clearly labeled and most (if not all) were organic or non-gmo.  I brought the bag of chocolate apricots over to my wife, who is diagnosed with Celiac disease, and her excitement matched mine.

That is until we read the 'fine print' below the ingredients.  I did not purchase the product or take a picture of the ingredients, so I'm para-phrasing here, but it read something along the lines of: "May contain trace amounts of soy, wheat, nuts etc.".

I understand that for many people being gluten free is a dietary choice.  Unfortunately, for my wife, it is not a choice.  If we had not carefully read the back of your product and she had subsequently consumed it, even if it only contained trace amounts of gluten, that may have been enough to make her ill for several, days, weeks, perhaps over a month.  She may have had to miss work, possibly even visit the emergency room.  I sincerely hope that your poor product labeling is due to a lack of understanding about what 'gluten free' truly means, especially those with gluten sensitivities or Celiac disease.

I hope that this oversight can be corrected.  Whether you change the labeling on your product so that it won't lead people to believe that it is completely wheat (gluten) free, or change your manufacturing process so that the product will no longer possibly contain wheat.

I look forward to your response, and hope that in the future we can even purchase your product.


Dear Ben,
Thank you for your message and for your very valid comments on the way this is presented on that packaging.
We clearly made an error on that package, which was subsequently corrected and the new packaging does no longer state that the product was produced in a facility where wheat is processed - which it is not.
Your wife could eat this product without a problem. These chocolate item contain no trace amounts of wheat (apart from the chocolate coated pretzels).
Our sincerely apologies for this serious oversight.
Eric