We got to visit Tokyo again! This is exciting, because the three days we spent in this glorious city in March just weren't enough to see and do even a fraction of what Tokyo has to offer. Not only did we get to visit again, but this time, we'd get to do it with family!

Cliff and Naomi were slated to arrive at Narita Airport in the late afternoon, so we planned to arrive in the morning via the Willer Express. After arriving at Tokyo Station, we deposited our luggage at a locker and headed for the nearest (you guessed it) Starbucks. I still find it amusing that we rarely visited Starbucks when we lived in the states, but now it's a commodity we get a little too excited about!

While trekking to coffee heaven, we made the realization that Tokyo Station is MUCH easier to navigate than the craziness of Shinjuku! After drinking a gluten-free-soy-mocha-frappuccino, I was ready to hit the streets. 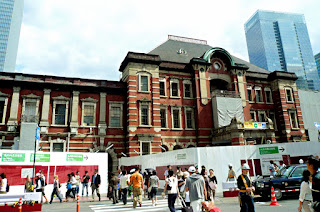 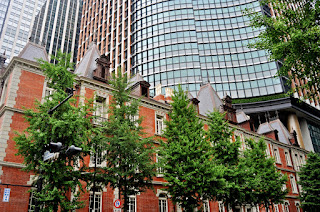 We headed first to the Imperial Palace. We were a bit disappointed, as everybody says one of the top ten things to do in Tokyo is to visit this place. We had heard there was a spectacular garden, but if there was one we never did see it.

The palace grounds are surrounded by two moats. Inside the outer moat is a tree-filled grassy area reminiscent of the reflecting pool in Washington DC. It was a beautiful place to have a picnic or take a stroll.

The actual castle lies inside the inner moat. It's difficult to see and is heavily guarded, since the emperor resides there to this day. The detail on the visitor's side of the moat, though, was easy to see and was made up of beautiful detail. The entrance bridge was beautifully reflected in the moat's water, and the filigreed fences surrounding the moat were exquisite.

All in all, we enjoyed visiting the palace, but wouldn't go so far as to call it one of Tokyo's "top ten places to see." 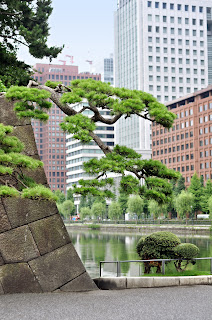 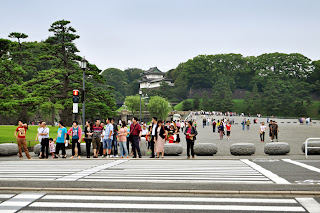 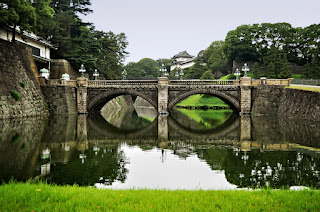 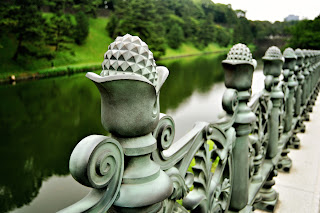 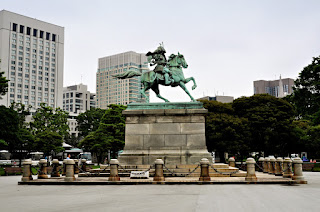 After the Imperial Palace was one of the places I was most excited about. You see, I have a thing for themed restaurants or restaurants that have a great background or story behind them. Our lunch destination was one such place: Gonpachi.

For those of you who have seen Kill Bill, you will recognize Gonpachi as the inspiration for "the House of Blue Leaves," where the Crazy 88 have their epic fight scene.

I figured if the real deal had any type of architecture close to its fictitious rendition, we'd be happy we visited. Boy, were we right! We traveled to Nishi-Azabu, a sub-neighborhood in Roppongi. Upon stepping in, we could immediately see why Tarantino was inspired by this place. Rather than try and explain its awesomeness, I'll show you: 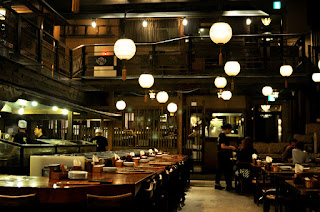 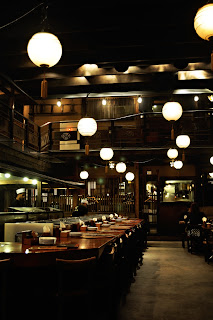 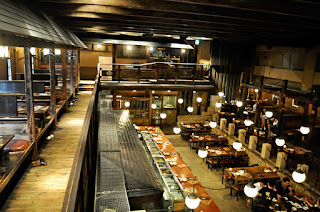 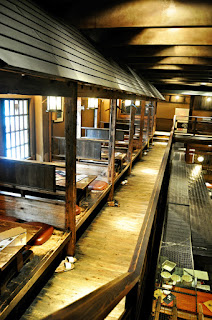 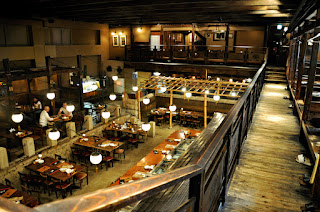 In the midst of this awesomeness, I was a bit concerned because this would be the first time I had eaten out since going gluten free. I was anxious about getting sick and had found some great advice on how to communicate my food allergy issues in Japanese.

I did so, and amazingly enough, we were given a server who not only spoke English fluently, but had spent part of her life near Sacramento. Teresa not only took the time to run every item I considered ordering by her manager to check for potential allergens, but we enjoyed talking about our time in Northern California.

The food was a bit pricey, but delicious, and we ended up really enjoying ourselves. (I will post another blog about all the gluten-free meals I found in Tokyo, as there are startlingly few blogs devoted to this for Celiacs traveling to this city.)

After Gonpachi, we checked Arisugawa Park (a beautiful and underrated getaway in the midst of the city's chaos) and then rode the subway back to Tokyo Station, where we met up with the newly arrived Cliff and Naomi. As all of us were exhausted, we headed back to the hotel to unpack and get ready for the next day. 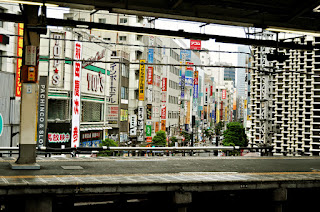 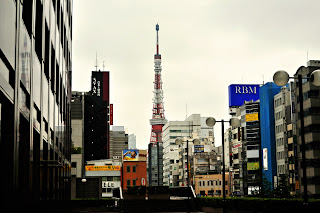 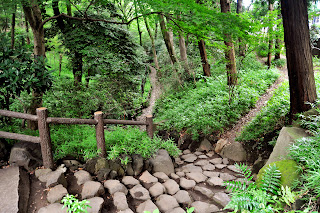 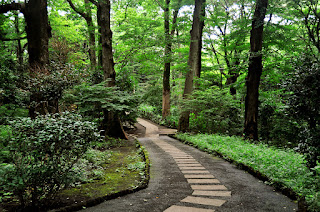 The rooms at the Monterey la Soeur were tiny, but this was Tokyo and we were exhausted! 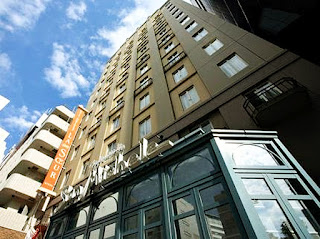